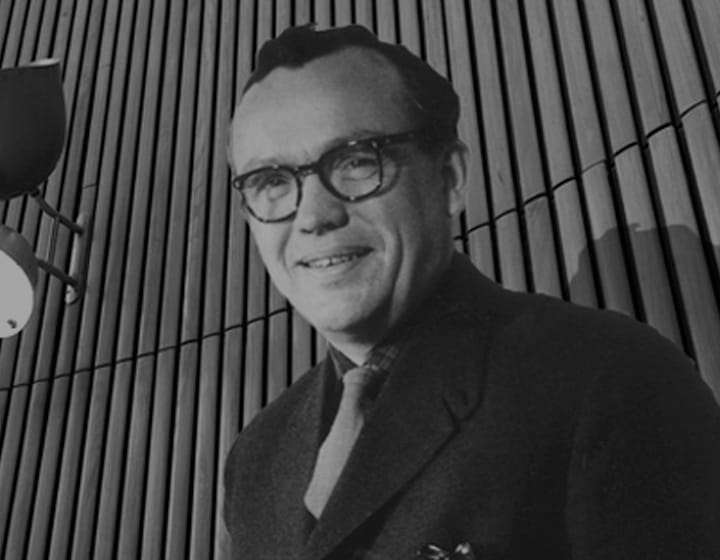 Born in Denmark in 1912, Finn Juhl studied architecture at the Royal Danish Academy in Copenhagen. After graduating, he worked for ten years in the office of Vilhelm Lauritzen, a leading Danish Modernist architect. In 1945, he set up his own practice, specializing in interior and furniture design. He was first and foremost famous for his furniture, though he was also highly respected as an architect and interior designer.

In the 1940’s he designed a number of creations that regenerated Danish furniture design, and broke with the established furniture tradition. Juhl’s celebration of the organic would become commonplace many years later, but his pioneering work was rarely equalled. . Juhl created design forms with the mindset of a sculptor and much of his furniture was technically ahead of its time. His great invention was the floating seating surface, usually upholstered, in contrast to the hard wood of the design’s bearing elements. His masterpieces “Pelican chair” and “Chieftan“ are illustrative examples. They were made in his partnership with craftsman Niels Vodder, and together they created a number of important works.

The Chieftan Chair in rosewood was destined to grace the Danish embassies world wide, thus fewer than 80 of them were produced and are today highly collectable. Later designs by Juhl were more specifically designed with the mass market in mind although every bit as beautiful and sturdy as the earlier classics. At the Milan Triennale in the 50’s, he was awarded five gold medals and won international acclaim for his furniture. Finn Juhl was influenced by surrealists like Jean Arp and Joan Miró. He won international acclaim before he was recognized in his own country. As an exhibition architect, he was the man behind the major showings of Danish applied art abroad which created the concept “Danish Design”. This also paved way for the Danish furniture industry’s export in the 1960’s. He dies in 1989.